June 24, 2020
Covid-19 has got to the nerves of everyone, someway or the other. However, there is one thing that has helped me maintain my sanity is endurance sports, like long runs and long bike rides.
There are days, when I've started doing my own mini-duathlon (say 20-30km bike ride followed by 10k run). This might sound awkward to many, but there are few who will be okay with me doing this.
Despite all this, even with so much physical activity, I've never attempted a half marathon alone. All my 14 half-marathons have been in some event or the other. Maximum distance I've covered alone, I guess, will be around 17-18km at a stretch. So to give it a try, last weekend, I thought of attempting a half marathon. All alone.
I made this decision pretty late I guess, as weekend was almost over. Yup, it was just another usual Sunday evening (there wasn't anything special gonna happen while everyone is stuck in the lockdown). I geared up and went down for a run. However, with Corona around the globe, going out for run wasn't an option, so I decided to run in the society I live in. (Whenever I discussed this thought with people, everyone had warned me that it is going to be a very boring job. One round of our society is just 400m and you probably have to do 50+ rounds for a 21.095km.) And then, at around 5:30 in the evening, I started what I decided. Did a bit of stretching and warm-up and I launched myself on a slow and steady pace.
....
(Long story short, I'll skip the thoughts I got during the entire duration of the run to be discussed on some other day.)
....
and finished in 2hours 41min. 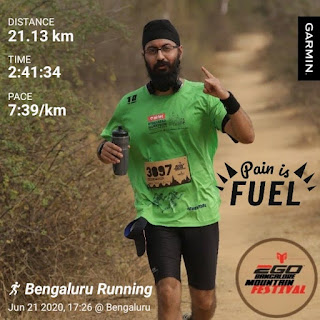 Yes, many of you would have guessed it, I'm not a fast runner. But luckily, I can maintain a consistent pace for long distances. Also, this was my first long run in 5 months, due to Covid-19 situation. Lost all the practice. So it was still a decent time and distance I'd say. (Ignore my flashy pic above, but that's how I look. Smart, right? 😉)
Later, on seeing the activity on strava, a friend messaged me and while discussing the same, I ended up having a deep thought on the same. Let me see if I can sum it up here:
I've never been part of any group. I've always practiced and ran alone. That's when it struck me, as in, why very few people run alone and that's why there are so many running groups all around the globe. Anyway, to end the same, couple of quick questions:
The same applies to everything in life, doesn't it? Acting alone and trying to do things on your own gets tough sometimes, isn't it?
Have a good day ahead..!!