India: A Journey from Developing Nation to Failed Nation...!!!

Believe me, if the trend which is going on, continues, it won't be surprising that if someone comes up with a book with some similar title in the next decade and it will be an EPIC SAGA.

Many of you must be wondering, I give very rude titles, but they come up almost impromptu after reading the newspaper, especially after the Education Section. Two weeks back there was a news that a 14 year old kid won a competition of MIT by making some app. Everyone who discussed this was proud, no matter he/she knew this kid personally or not. Similarly, few months back it was 2 brothers(12 and 14 year old) who made app and planned to start their own start-up. Every one was again proud.

Obviously, the main effort was by the parents in both of the above cases. But what can one do when

Government itself is MOCKING the whole EDUCATION SYSTEM...???

Central Board of Secondary Education (CBSE) recently introduced a rule that the students of 9th class have to score only 25% marks for passing and soon it will be made compulsory for 10th class students as well. What will be the future of the education? Or we can re-frame it as, will there be any education standard left after one or two decade in India, which was known for its education for centuries? Few decades back it was said that scoring 75-80% marks is like reaching cloud number 9. Then level of education was reduced little bit as syllabus was increased and now even if you score 99% you'll be doubtful whether you'll be getting admission or not. So, what the hell Government of India is trying to do by passing students with 25% marks...??? Now don't tell me its for those who don't get proper time to study. Everyone scores atleast 50% of he/she has studied or even read a book even once.

There were few more cases, where parents did complete justice on their behalf but Indian Government mocked them, like:
No one came up with much remarks after these incidents except those who appeared for JEE or were planning to appear in the upcoming years. Maybe because the students who passed that stage few years back are not bothered because they are not worried about it or atleast they don't have to think of their next generation as of now. For such people, Good Luck after few years.

So there are 3 solutions for the above problems, either
But unfortunately politics these days remind me more of a bunch of people of small localities or villages fighting after getting drunk or teens fighting over some game of cricket or football(or sometimes some girl). For example: 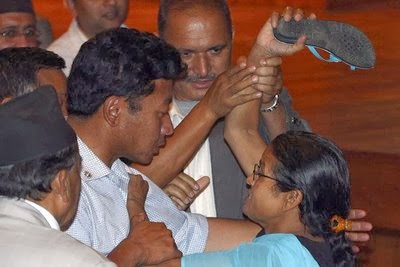 The above image is an example from one of the sessions from Indian Parliament.

Recently almost every youth(Indian) has started taking sudden interest in Indian politics. I guess everyone has noticed and quoted this point to at least some people, no matter how much they understand politics. I'm not afraid to admit that I too don't understand it much though, but still I can comment one thing, that these days

Politics can be compared to COMEDY CIRCUS...!!!

After working for almost whole day, when people come back home, they used to talk to their families, rest and try to lighten their mood. TV's were turned on and programs like Comedy Circus and all are searched for in the first place because if by chance you turn on some news channel, it will be some politician/leader yelling upon/against some other politician/leader. For other channels showing "Saas-Bahu" serials, you know Ekta Kapoor has made them obsolete that ladies also don't like to watch them.
However, from past few month or you can call it an year, news channels are the biggest focus again. All of you remember the most hilarious interview which recently took place, yes, the one and only Rahul Gandhi's Interview by Arnab Goswami on Times Now. For those who have missed it, can watch it here:

Not a single answer, which was given, was for the question which was asked.

Anyways this was just one incident, there are many which recently happened, like
Anyways the list is long, I don't have time for listing them.

Right now, being a student, I don't think it is the write time to worry too much about all these. Maybe after few years, I'll think of contributing something to this.

PPS: For AAP supporters, please don't start arguining in comments with me on politics due to above comments, I'm not against AAP, but I'm against there methods which they adopted in few cases. Its better that they should take some time and get themselves settled and then act.

One last thing, if current scenario continues for education, India will definitely FAIL...!!!