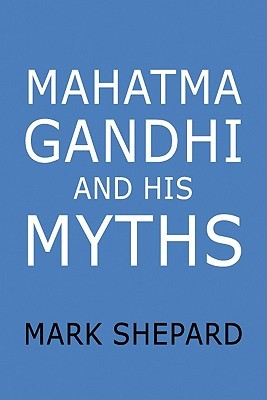 
Okay. Lemme tell you first, I'm not a Gandhi Fan, hence there won't be any mention of the word "Mahatma" before Gandhi's name in the whole post except for the book title. Also this book has been written by an admirer of his.

The book has been written in a very brief and precise manner. There are many aspects about Gandhi and his actions which we generally neglect because either we've only read about some repetitive stuff, praising Gandhi, since our school days or about what he did wrong (which is a lot of stuff been published in the last 2 decades and is banned in India). This book has covered those neglected aspects beautifully.

In this small write-up, Mark has basically focused on Civil Disobedience, Non-Violence and Satyagraha Movements started by Gandhi. Here he has explained the basic principles of these movements, which at least I, personally, have not found anywhere. After reading this text only I realized that these things were obvious from the names only, but has never been thought by anyone. In simple words, he has provided us with an obvious picture about Gandhi which none of us wanted to paint about him either because many of us didn't think about it and rest who thought missed or neglected it; or remaining others, like me, were busy criticizing him. I don't want to go into the details as the book is already too small and simply written.

Anyway, the book is a must read, especially if you're an anti-Gandhi. Obviously every one has a positive and negative conscience and if the so-called "Father of the Nation" has really thought in the way as Mark has explained, then for the first time Gandhi has gained a small bit of respect from my side.


PS: The paperback edition of the book might look expensive, but it's available in a decent and affordable price in Kindle Edition on Amazon.