Udta Punjab: A Well Versed Movie with a small tinge of Bollywood...!!! 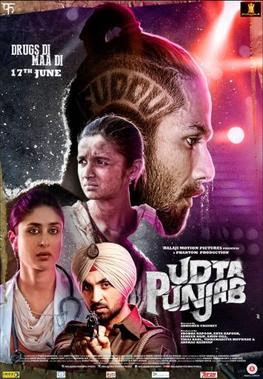 I don't think I need to give basic introduce about this movie, especially with all the hype it got due to censor-board and politics. Lemme just give the basic introduction. The movie is starring Shahid Kapoor, Kareena Kapoor, Alia Bhatt and  Diljit Dosanjh in the lead role with a run-time of 149 minutes. Written and directed by Abhishek Chaubey.

The story kicks in with a drug addict star, Tommy Singh, who lost a good deal for his release of an album due to his addiction. In parallel, a migrant worker from Bihar finds a packet of drugs in the field.

Majorly, the story revolves around Tommy Singh, our migrant worker and the life of a young boy, Bali, who is a drug addict and the brother of a police officer Sartaj Singh. Bali's truth comes out to his brother and family due to his once overdose of drugs when he gets hospitalized. That's when Sartaj meets Dr. Preeti (Kareena Kapoor) for his brother's treatment and together they start a quest of exposing the roots of this drug-scandal in Punjab.

The story continues with few expected Bollywood flavor twist and turns. Like a big star running and fighting the world, escaping the cops and traveling on a bicycle to cities just to find a girl. However, the movie has perfectly portrayed the real picture of Punjab which has never been presented to the outside world. For example, the youth killing their parents or near ones for the drug addiction. We consider the elderly, white bearded sardar uncle's as figure of warm and affectionate personalities, however, no-one is picture perfect, right? Like the eldest leader of drug gang, how cruelly he leaves Alia for his boys to rape her. Similarly, how the police helps with trafficking of drugs and how politicians take advantage of drug problem for their vote-bank. Most of these problems, at max, we've just heard from our friends or maybe somewhere in the news. However, the very much needed dirty picture of overall ideal and calm looking state of Punjab was impressively presented on the big screen.

Overall the best performance in the movie or in other words, the person who literally stole the show was Alia Bhatt. She has once again out-performed all of her co-stars. Luckily, the Bollywood now has someone who can perform extra-ordinarily in all kind of roles. Other than Alia, Diljit Dosandh has justified his role. If all goes good, he is going to be a strong contender for his debut Bollywood role.

PS: Like other Anurag Kashyap's movies, this one also would have deserved a perfect or near perfect score like Gulaal or Gangs of Wasseypur. But that's the point where Udta Punjab has missed it score is that Anurag Kashyap has not directed this movie. Like the other two classics which I mentioned, if the film-makers would have focused less on big star-cast or would have chosen someone who suited the roles better then it could have been much better. Like there could have been better options than Shahid Kapoor for a drug-addict star in the movie. This point along-with the story, especially in the second half, forced me to add the second part of the title of this post "Small tinge of Bollywood".

PPS: A reminder for my dear sceptic Indians, the abusive language has not been censored in this movie. Also the use of drugs has been shown in pretty clear manner.